Towards the end of last year we bought a tent, thus fulfilling a longtime of The Accountant’s to begin our own family camping expeditions.

It’s rather unfortunate for The Accountant that the year he finally bought a tent the drought breaks and we get the wettest summer in the history of Queensland. You could say that The Accountant has been a little agitated that it has not been camping friendly weather, unless you are a duck.

This week his level of anxiety for the lack of camping climaxed and he bundled us all into the car to go camping at the beach. We had been watching the weather all week at the Gold Coast. It had looked extremely promising, mostly hot and humid with minimal showers – only a 2 or 3 ml. We were even wise enough to leave it until the last minute to book, since the weather has not been too reliable lately. Unfortunately that was no guarantee of promising conditions. Within hours of booking the weather report changed to ‘storms’.  Undaunted, but perhaps even more agitated that his plans literally had a dampener, we drove to Nobby’s Beach at the Gold Coast. The Accountant was remaining optimistic. The weather radar that we had checked before leaving had no rain actually at the Gold Coast. (Just surrounding it and slowly heading down!)

Had we not got lost  taken the scenic route once we got to the Coast, we may have even managed to put the tent up before it rained. Instead, as soon as we unfolded the canvas, it started pouring. At least we hadn’t started to try and erect the tent. We folded the tent in half so the waterproof side was up and waited for the rain to ease a bit. By this stage we had chucked a whole heap of bags throughout the car, so the J Bomb sat in the corner of the boot, I squeezed into the front of the car and The Baby pretended to drive and get into all the spare change and throw it throughout the car in gay abandon. The Accountant had noticed our umbrella’s weren’t in the car when he was packing, but for some reason hadn’t gone searching for them to include in our packing. Luckily I had packed The J Bomb’s umbrella, so The Accountant stood miserably by the car sheltered by a small Buzz Lightyear brellie.

Lucky for us, the rain did ease somewhat. So we put the tent up in drizzling weather rather than in a storm. The hippies  in the campsite opposite us seemed to enjoy watching the show, but mustn’t have been the “Help Mankind” breed of hippies because they choose to continue playing their guitars, singing folk songs and smoking while we put the tent up.

Here’s some J cam of us when we were just about completed.

Who knows why The J Bomb chose to photograph my lilly white legs. I’ve included it since the shoes had a blowout a bit later and were deposited in a bin at Harbour Town once I acquired a new pair. I did like those shoes…

We then went for a walk up to the beach. We discovered that a large majority of the beach had been washed away making it difficult to wheel the pram down to have a walk along the sand, so we stared at the grey ocean. The Accountant took the boys down for a quick play on the sand, while I guarded the pram against nasty pram thieves. (I’m sure they are about.)

We then headed back and bathed the boys. Well, The Accountant showered J Bomb, and I really did bath The Baby. There was a pink bath built probably in the 50’s – or whenever it was that pink baths were in vogue, in the ladies toilets. It’s actually a great inclusion for kids. The Baby had no appreciation for historical baths, and hated. He viewed the pink bath with great distrust and made it the shortest bath in history.

We then walked across the road and had some lovely Thai for dinner. It was a great recommendation by a friend who used to holiday all the time at Nobby’s Beach when she was growing up. I even had her late Nana’s favourite dish of chicken cashew nut. (Apologies to Nana that I enjoyed the Massaman Curry more.)

Back in our canvas mansion, it really is, as far as tents go. You can stand up and walk around in it. No stooping for us when we ‘glamp’. And it has three rooms, so we had a whole room in between us and the boys! It took awhile for the boys to settle down and once they did, we collapsed ourselves. Throughout the night, it absolutely bucketed down rain. The canvas mansion was wonderful. No leakage at all and thankfully it also did not blow away in the big gusts of wind that shook it from time to time.

I have to say I felt a little bit smug when I emerged from the tent to discover all the other tents (excepting the camper trailer, which was mansion even finer than ours) had not fared so well. All of them had lost their flys and the poor Muslim couple and their little girl next door to us had been flooded and spent most of the night in the car.

It was not a restful night’s sleep though. Our air mattress was fine, but heavy rain is very noisy when there is nothing between it and you except a bit of (very good quality) fabric. Plus, being situated next to the Gold Coast Highway probably isn’t the most serene of camping spots. It also wasn’t restful being awoken by one excited 4 year old boy at 4:30 in the morning yelling, “It’s morning time, we can all get up now. What’s for breakdast?” (Cannot convince him that an “f” is in breakfast.) The Baby was the only one to respond with any type of enthusiasm to this morning call. The Accountant and I tried to ignore the rabble for as long as possible. Eventually I got up, (The Accountant is NOT good in the mornings), and fed the baby. The J Bomb had eventually gone back to sleep after our refusal to go to the beach.

When everyone was breakfasted and fed at what is considered a reasonable hour for camping, 7:00, we all put on our cossies and headed to the beach. The beach was again a disappointment. It was high tide – once again no good for the pram – and we couldn’t swim in it because there were blue bottles everywhere. So back to the holiday park swimming pool. The boys didn’t mind at all. 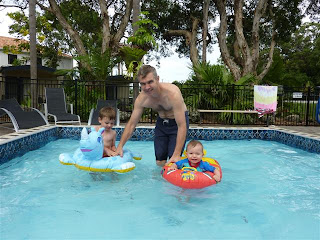 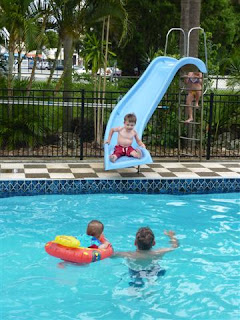 After showering we spent the day at Harbour Town outlet shopping. (If you are going to take an accountant shopping, discounts will always improve the experience.) A quick trip to the beach and then another dining out experience. This time at a restaurant called, “Transylvania”. I ordered the traditional “piglet on a spit.” That little piggy was particularly delicious, however, there was a lot of him, and unfortunately the traditional accompaniment was pickled vegetables, which I was not a fan of.

Back to the canvas mansion for another restless night. The folk song lovely hippies had transformed themselves into just your typical long haired louts who liked thrash music. Luckily they still must have had enough peace and love to turn the music off at a reasonable hour, so I didn’t hold a grudge against them until about 11:30, when they decided to have a mate over who drove his van into the campground, shone his headlights right at our tent and then get out and talked loudly on his phone for half an hour.

Then just as we were drifting off to sleep a camper trailer pulled up, did a 50 point maneuver to get into position and set up camp. I had to wake up at 3am. for a toilet break, nothing so delightful as a midnight stroll to do a wee. It was good timing as there was another nice storm after I got back.

The boys were kind enough to let us sleep until 6am. We drove to Burleigh Beach (no blue bottles there) for a swim and the boys played on the playground in the rain. 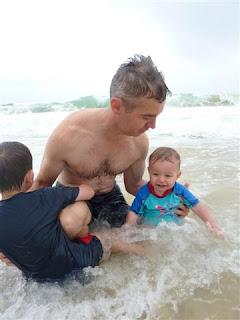 We then packed up. Luckily the sun shone while we did, just long enough to dry the tent before we had to pack it up and head home.

So that is the tale of our 2nd trip family camping trip. Camping isn’t my preferred holiday mode, but it is still great to getaway but more importantly the kids and hubby love it. It’s always good to create some family memories.
﻿