I’ve just had the loveliest of Valentines Days. It was simple, a little bit of effort, but nothing nonsensical. Kept things simple, but it was fun.

I found myself explaining Valentines Day to J Boy after we had done a Valentines craft at playgroup.

I explained it simply to him, “Valentines Day is a day where you show people that you love them.” After such an explanation, I found myself wanting to make the day special for him and The Baby, since I love them with all my heart.

We started the day going to a storytelling session held at a local church. It’s always a lovely morning and the boys are completely doted on by all the lovely old ducks who volunteer to make the morning special for the kids by playing with them, making them morning tea, reading stories etc. They did a Valentines craft too, so the theme for the day was set.

J Boy rode his bike while I pushed the pram and walked the dog home stopping via the library. We were followed home by a young staffy dog, that’s been the low point of the day, as she is now staying with us until hopefully her owners are located, but  is a terrible whiner. J Boy told his father that “It’s a strange dog because it doesn’t bark, but it does squeal. It squealed and squealed and squealed when it got put in the yard.” Good description son. I’ve rung the pound and the local council service centre in the hope that the owner will get in contact with her. As yet, no one has claimed her, I really don’t want to send her to the pound, but sheesh, this whinging is driving me bananas.

Anyway, I got enthusiastic and J Boy and I made The Accountant his favourite dessert – chocolate mousse. 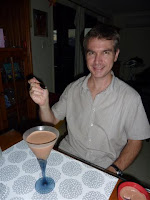 Then I thought I would make the boys chocolate and choc chip pancakes in the shape of love hearts. It looked a little better in my mind, but if you use your imagination, you can see where I was heading. Didn’t matter anyway, boys being boys only really cared about the taste, and that got the thumbs up!

J Boy and I picked some flowers from the garden for table decs. Since learning that some rose petals are edible, J has been fascinated with the whole concept, so he ate some the table’s centerpiece and declared it delicious.

I had found some funky love heart pasta, which we ate with the age old family favourite: bolognaise. Even decided to use the family heirloom Royal Albert for the occassion! J Boy used his very own Wedgewood (Peter Rabbit!) for the first time. I almost had a hernia when after strict instructions to carry with two hands he decided to swing it around with one hand by his fingertips. Close call.

So dinner with not one male, but the three males I love most in the world. It was one of the sweetest Valentines ever.