June 17, 2011 3 Comments
Week 16
The long awaited doctor’s visit is here – Hurrah! And it was indeed hurrah, because  all three bubba’s were tucked away safe and sound. Three strong heartbeats were detected, they all were moving and looking very adorable. I had been praying that we might be able to detect the sex at this early age. Alas, only one of the three was completely shameless and immodest exposing ?His/Her? genitals to us! (The Accountant wants to keep it a secret for now.) The big question was whether our little flasher was the identical triplet, because if it was we would know the sex of two. At first Dr. G said he didn’t think it was. However by the end of the session Dr. G was fairly certain upon closer examination that it was the identical triplet. So looks like we do know the sex of two of them. He briefly thought he may have also seen the sex of the fraternal triplet, but he couldn’t get a good enough angle to confirm it.
Jonty came along to watch this scan. He was very excited. He has been hoping for a girl. When Dr G was searching to discover the sex, he was muttering, “I want a girl, I want a girl, find me a girl.” Boy or girl, I know he’ll be a great big brother, with the customary extent of annoying big brother thrown in for good measure. He also thought the babies looked like dogs on the ultrasound. Very flattering. We haven’t taken Toddler T to a scan yet. Mum was quite happy to babysit, which truthfully is easier than trying to keep Toddler T still! When we came home J Boy asked why some babies were white and why some were orange babies. I had to explain the difference between the regular ultrasound and the 4D ultrasound and assure him that all three babies are really regular baby colours. 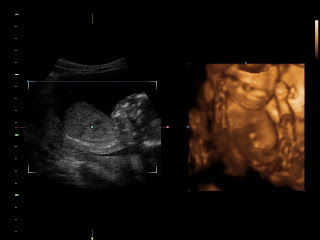 My uterus is now the size of a 24 week pregnancy and I have put on 8kg. (I put on a total of 11kg with Toddler T and 2 weeks before he was born I stopped weighing myself at 18kg with J Boy, because I didn’t want to see when the scales told me I had put on 20kg.)

Week 17
I have been feeling fluttering now since about 15 weeks. It has been different to the previous two pregnancies. Once I felt something with the first two, each day I felt more flutters and it just kept getting stronger. This time I might feel something, but then nothing for another couple of days. Some days I feel quite a few flutters, then nothing. It is a bit odd. I can’t remember what week it was when I first felt the boys move, so maybe this is just because I am feeling it a bit earlier.

This week the movements have been getting more consistent. I can now feel movement each day. It’s always comforting. I can’t distinguish which triplet is moving yet, and sometimes the movement is confined to one area, so I’m presuming I’m only feeling one child at those times.

I taught a day this week. I discovered that the teacher’s aide in the prep classroom I was teaching in was also 17 weeks pregnant. We asked the children why they thought my tummy was bigger. One boy helpfully suggested that the baby had kicked my stomach out, another thought I just had a bigger baby (Imagine me, with such short stature giving birth to a giant!). Her bump was barely perceptible. I looked enormous comparatively.  I consoled myself that, (apart from the fact I have three), she is a very tiny person and it is her first pregnancy!
Previous Post Next Post

The Triplet's Birth Story – Part One