It’s official! The triplets are now one year olds!

Sunday was the big B-Day. The babies had a wonderful start to the day by waking up at 6:30am instead of 5:00am. It was just as well, because they had very little sleep the rest of the day. They just snatched catnaps here and there as we had them on a very hectic schedule! (Poor babies!)

Once we were all up, we did the breakfast routine, and scurried around getting ready for the party that was scheduled after church. Of course in the midst of this was the opportunity for the triplets to receive their presents from Mummy and Daddy, (and their big brothers).

This is the first glimpse of the colours of the day. Of course it had to be the triplet’s colours. Red (Chook), Blue (Joey) and Pink (Missy).

So, what was in the boxes?

These cute little wheely bugs are adorable! If you are interested, I got a great deal over here at Classic Baby. (I’m just sharing this with you because I think they are wonderful, no other reason.) They go backwards, forwards and side to side. T-Star has already done some serious doughnuts on them! (Just as well he is getting a larger sized tiger one for his birthday in just over three weeks time.) At the moment the babies are using them as walkers or pushing them around on their knees. They are seriously loving them.

We then headed to church since it was a Sunday morning. After one year we are getting closer at arriving to church on time. We are now getting to the church just before it starts, but by the time we unload all the kids it’s started by the time we walk in. Just need to work on getting out the door five to ten minutes earlier! It sounds so easy. If only it were so.

Our church family were happy to share in celebrating the baby’s birthdays. We had this picture on the big screen of when they were tiny babies, and then one of last weeks beach pictures. How big they have grown in the last year!

As per usual the triplets fell asleep en route to church. As per usual they woke up during the transfer from car to stroller. In retrospect, we should have left them sleeping with one of us staying in the car and texting the other parent to come and help once they woke up. But hey, most of us don’t have the wisdom of hindsight to operate on.

So instead, the only sleep the babies got all day was a bit of a nap on the way to church, two babies had a little snooze in church, (Highly unusual. A friend offered to rock their pram while I listened to the sermon with my husband. She must have a gift.) and a little nap on the way home.

When we got home the house gradually started filling with guests. As I have said, it was only our family and a few very close friends, but my goodness! It became so very noisy so very quickly with 16 children 10 and under. I could blame the fact that 10 of those children were 4 years old and younger, but the reality is that it was the older kids making the most noise.

The babies couldn’t wait for the chicken that was being cooked on the BBQ. They ate some of their favourite root vegetable mash while most others consumed nibbles. 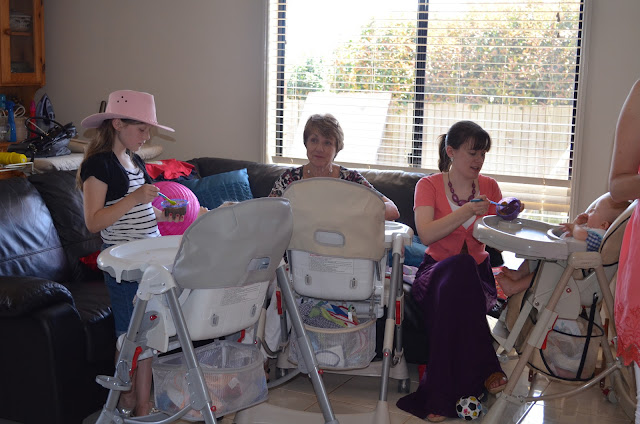 After that, being the eternal optimist I put them down for a nap. Considering all the older children were playing in the hallway outside their bedroom, expecting anyone to sleep under such conditions was an entirely ridiculous notion.

So, we all donned our party hats, (party hat wearing was strictly policed and enforced by eldest brother and pocket rocket cousin), and partied on.

Anyway, why should the triplets miss out on their own party by going to sleep? Oh, extreme tiredness. Yes, that would be a good reason. Oh well, never mind!

But they were little troopers and embraced the birthday cake experience with enthusiasm, despite their sleepy states.

Once the babies had all finished, they had a bath.

Once they were dressed in their new owl shirts, they continued being the centre of attention.

Lastly, there were presents to open.

By the time everyone left, we had some babies suffering from extreme tiredness. (Not to mention us parents!) Poor little things were too tired to eat much dinner and had a good cry before drifting off to sleep. It probably has taken them three days to get over the excitement!

I’ll do another post detailing more about the owl theme of the party.