The Indiscretions of Thomas the Tank Engine and Friends

18 months is a magic age. All of a sudden Toddler T became interested in TV. I don’t care if that makes me a bad parent, to use Thomas terminology, TV/DVD’s can be ‘really useful’ to distract the kiddy’s while you run around like a madwoman trying to catch up on a variety of tasks.

Toddler T has developed a strong attatchment to Thomas the Tank Engine. It is a true addiction. He will often wander up to me with the TV remote saying “Dain, Dain” (Train, Train)  and then will sit up to 15 minutes glued to the telly. (Pretty good for a 19 month old) There are other bonuses too. His nappy changing behaviour has greatly improved since I put a Thomas poster next to the change table. He now will allow me to get on with the job while he compliantly lies there and points to the engines. 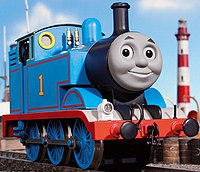 I fully support his adoration of trains. I like Thomas, truly I do. The quaint little stories, the proper British accents, the various engines and the innocence and simplicity.

However, sometimes I really need to wonder about codes of conduct on the Island of Sodor.

For instance, the boys were watching Thomas the other day when I overheard this in the story. It appears that the class system is thriving at Tidmouth Sheds.

Diesel the Engine had problems completing his jobs because the trucks were being troublesome. (Makes sense since they are called the ‘Troublesome Trucks’.) Diesel accused the steam engines of telling the trucks to make his job difficult. Their response was:

“Nonsense!” said Henry, “We engines have our differences but we never talk about to the trucks. That would be d-d-d-disgusting”
“Disgraceful” said Gordon.
“Disgusting” said James.
“Despicable” finished Henry.

I can’t help wondering whether the truck’s behaviour might improve were they given half a chance and treated with some dignity. Even J Boy spent the evening last night wandering around saying his newest Thomas quote, “Trucks are nobody’s friends.” In my very best modern parenting, politically correct motherese I tried to adjust this mindset. “I’m sure even trucks have their good points. Maybe the trains should be kinder to the trucks you should try to be friends with everyone. They might find the trucks aren’t so bad.”

But, no. There is apparently nothing good about trucks. It’s impossible to be friends with them.

No difference to many peoples attitudes towards teenage delinquents?

And then sometimes I need to question The Fat Controller’s management techniques. Really, I think Sir Topham Hat can be a pompous old crumpet loving, (in a recent episode I watched, Thomas was pressured to deliver on time so Sir Topham Hat and Mrs. Hat would have their crumpets in time for brekky.), who does not administer justice. It seems that if you are sneaky enough to pull a trick on another engine, you will not get punished for it. In fact, quite the opposite. I’ve seen trucks bump others, yet The Fat Controller will punish the engine that made the damage, not the engine that bumped them!

And then there’s the whole issue of being “Really Useful”. It seems that the engines are petrified of being sent for scrap metal if they no longer are really useful. The engines purpose in life seems to be connected to their usefulness. Of course usefulness is highly beneficial and hard work is a commodity not valued by enough people thse days. But, I’m sure that the trains living in this usefulness frenzy  should not be the case. I am quite sure that the good Rev. Awdry lived his life according to the Biblical principal, that by grace you have been saved, not works. (Rom. 11:6; Eph 2:8) Surely the engines have a higher calling that is greater than their accomplishments?

So, has anyone else had issues with Thomas and his counterparts. Or am I the only supercritical over analysing mother out there? (I probably did enjoy my course on children’s critical literacy a little too much at uni.)

Having said all this, I repeat. I do like Thomas and his friends. (You may sing that last line.) The fact that it can be a trifle politically incorrect probably makes a little more endearing to me in some ways! Toddler T is getting Thomas for his 2nd birthday, and it is going to be a sad day in our house when this lovable little engine is no longer ‘cool’ in our house!

Why Great Nanas are so Great