I used to love eating rhubarb as a kid. Mum grew it in our vegie garden and stewed it. It used to be one of my favourite desserts with ice cream.

So, I have grown my own rhubarb plant. Sadly, for some reason that I do not know, it’s more green then the lovely red colour I’m familiar with.  Perhaps, one website suggests, it’s because I let the leaves compost around the plant. You shouldn’t do that apparantly. But this is the plants first year of life, so that reasoning doesn’t apply here.

Google has told me that this is fine to eat. So this week, eat it we did.

This year Santa gave me some cooking DVD’s. I wasn’t too enthused, despite my love of cooking, I rarely cook anything I see on TV.

I hadn’t heard of Annabel Langbein , “The Free Range Cook”, before. But once getting over the initial shock that she was a kiwi. And bit my irrational Aussie pride to admit that she was a very skilled Kiwi, I am loving the tasty dishes she whips up in her country kitchen.

So, I chose to eat the first harvest of rhubarb as a Raspberry and Rhubarb Crumble. Here’s the recipe if you are interested. I can confirm that it is delicious. So can the J Bomb. He took two mouthfuls, looked up and said, “This is yum Mum!” I know it doesn’t sound much, but that’s the first time in his 4 1/2 years of life that he has articulated a compliment for my cooking of his own accord. I always know when he’s enjoying something. (He literally hums while he’s eating stuff he enjoys! We call it his good food motor.) But it was a nice moment to hear the words coming from his mouth.

Annabel suggested 1/2 cup of raw fruit in each dessert. It can be any type of fruit. I think mine had slightly more than, I just filled up the ramekins. This is my green rhubarb!

And then I added the berries and mixed through. On the DVD Annabel used some lovely fresh raspberries she picked up from a local market. I used frozen, and they tasted just fine. 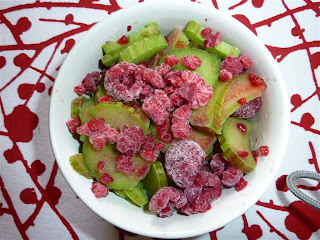 Annabels tip to avoid a soggy crumble was to add 1/2 cup sugar and 2 teaspoons cornflour and sprinkle on top.

Mix all the dry ingredients together then stir in the melted butter. Press the crumble over the top of the fruit and bake in the oven. Mine took about 20 minutes.

This is a huge crumble recipe. I only made half the recipe and it made six individual crumbles and still had some leftover. (I was trying to conserve pantry ingredients in case the trucks weren’t able to get through for awhile. No need to worry as it turned out.) Annabel says you can freeze it and use later. Or she says you can spread it out on a baking tray, cook then sprinkle over desserts or yoghurt. Or mix the crumble with condensed milk, press into a baking tray to make muesli bars. (Drizzle with white chocolate once cooled.) I’m definitely going to try making these homemade muesli bars next time!

Iced Shoe Cookies – or Biscuits if you are an Aussie … or English.