How to make Bunting

I’ve taken awhile to get back to posting about preparations for Liz’s 30th Party. To help achieve a classy but fun party atmosphere, I decided to make some bunting – polka dot of course. I bought a variety of polka dot fabrics (on sale at Lincraft, hooray!). I used four different fabrics and bought 0.5m of each, there was a few triangles left over. I made a simple triangle template (using an old cereal box!) and used it to mark out the triangles to cut with tailors chalk.

I had folded the fabric in half, which made it easy because there were then two triangles together ready to sew. Basically then it was a simple case of sewing the two wrong sides together. I left the top open. Turned it out the right way, using a blunt pencil to push the seam in at the tip of the triangle. I also found giving the tip a bit of a trim helped it sit nice. Then I ironed the triangles so the seams sat flat.

I bought two lots of 5 metre cotton tape. I ironed the tape in half, then placed the top flat edge inside the folded tape pinned them all in place, then simply zig zag stitched all the triangles to the the tap. I also folded the tape over in a loop at the end to make it easy to hang. 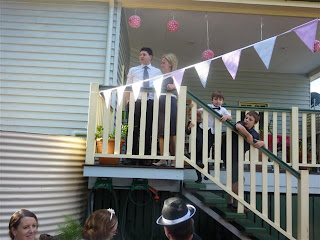 A simple little project I have been wanting to do. All up it cost less then $30, which I thought was pretty reasonable. I’m already planning what colour combo’s I would use to make another bunting one day. Such fun!