We’re so proud of him. And to be truthful, he’s so proud of him too. He struts around as proud as a peacock in his school uniform and tries to catch people’s eye so they can admire him. He loves to push out his chest and display the school crest to anyone who expresses interest. 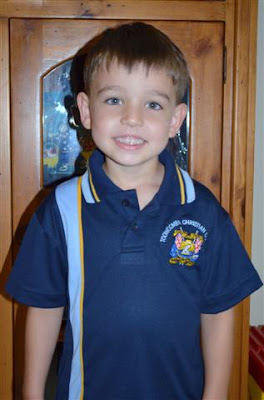 You’ve got to say the right thing though. One Myer’s shop assistant mistakenly commented that he was a great little brother. Oh the indignity. She didn’t stay still to be corrected, so J Boy took it upon himself to yell out as she walked away. “I’m a big brother – we have lots of babies. And I’ve FIVE! And I go to SCHOOL!”

In case you were wondering. There were no tears from me.

It was a lot easier to say goodbye when I know that he is so ready for school. It is a little sad that this period when I get to spend so much time with him throughout the week is over. He did make it easier for me in this area also, by constantly teasing T-Star over the last fortnight. It’s quite peaceful at home, even though we do still miss him. So now I will continue to cherish the precious early childhood years with the remaining four children at home.

I think that J Boy was sincerely disappointed that I didn’t cry. I had joked that I might a few weeks before school. He took it to heart and the night before school began he warned me how hard it was going to be. “It will be worse for you.” J Boy solemnly declared. “When I’m at school, you’ll have to put the babies dummies in by yourself all day. You’ll probaby miss me so much you’ll cry so loudly that the neighbours will hear you.” On his way to the classroom, he examined my eyes and seeing no tear glistening within and he told me, “You may not be crying now, but when all those three babies start crying. You’ll be crying with them.” The poor child was so disappointed that I coped so well in his absence.

J Boy had the pleasure of starting school with his cousin and best friend, “The Pocket Rocket”. 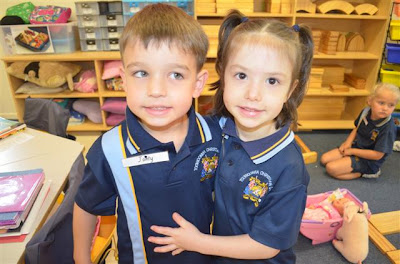 The good thing about having my neice in the same class as J Boy is I get to hear what is happening. At the conclusion of the first day, The Pocket Rocket was full of stories of what had happened throughout the day. When she paused, I asked J Boy, “And what did you do today?”﻿
“Mum” he sighed with an air of exasperation. “We’re in the same class. We do the same things…”

And with that he assumed the air that he was ‘off the hook’.
A little later in the week, I managed to get a part report.
“Did you learn a new sound today, J Boy?” I asked.
“Yes. The girl sound. What’s the girl sound Mum?”
“Well, would it be g-g-g- girl. The letter “G”?”
J Boy thought hard and then looked confused. “I don’t know Mum. There’s lots of letters in the alphabet. It could be any one of them.”

Have you any children/neices/nephews/friends children who have begun school? How do you get extra information about the school day so you don’t just hear that they have forgotten, or that ‘nothing’ happened.
Previous Post Next Post

Out of the mouths of babes.