The beauty of celebrating Christmas with children is their excitement on the day and the lead up to that day. I was just sitting at my computer, and glanced up at the Christmas tree and was amused to see that the J Bomb has obviously been tampering with the tree.

We had hung the candy canes so they were spread throughout the tree. It had taken a lot of guidance because the J Bomb had to be instructed in the ways of creating a balanced tree. Obviously he didn’t take to heart my lesson in aesthetics. There is futher evidence of tampering. I had forgotten to put the bead garland in the tree. (Possibly because I was trying to keep up with the J Bomb’s enthusiastic decorating.) I put it away for next year. Obviously J found it and decided it MUST be included.

And then Lo and Behold, he found more beads.﻿ 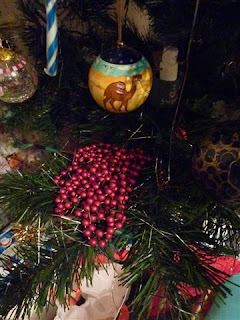 Before I had children, I used to take my time decorating the tree, and have every garland and bow hanging just right, the colours and ornaments distributed evenly throughout the tree. This is our child assisted tree!

(The ribbon hanging at the front is another unauthorised inclusion. It’s supposed to be hanging in the room somewhere, it has a bell on the end.)

But I should show you the tree if I take one step back. The Accountant made a baby barrier out of boxes, which also does not favours for aesthetic elements. Plus the baby can still climb over the top of them, however, it creates a delay. So far we’ve had one glass ornament smashed and Grandma has had a smash. 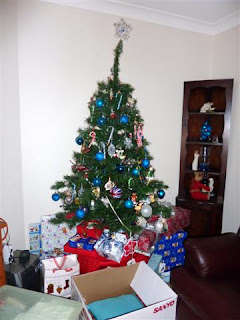 Decorating with kids is much more fun, but hectic, and of course colourful! Jonty choose blue baubles this year and even found blue tinsel to go with.

Even Mickey the Fish is looking a bit festive in his corner. 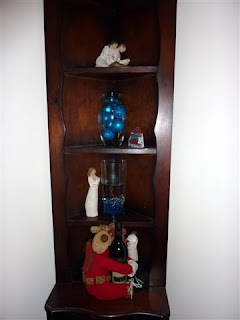 This is my favourite Christmas decoration this year. Red felt, simple buy stylish.

Of course my Willowtree Nativity Set is always a fav, on display as you enter our house.

It now has a sad family tale which I know I will regale every year as I put it out. Last year I sat the J Bomb in time out. He thought it was unjustified and the poor innocent wiseman was the object of his revenge. I cried. Then J cried because Mummy cried, then we howled. It wasn’t pleasant. Poor Balthazar literally has a chip on his shoulder over the unfortunate incident. He is also a bit upset that he has lost his gift. And now looks like he is folding his arms in reverence rather than holding myrrh.

Another thing that is contributing to the sense of anticipation in the prelude to Christmas is the Lego Advent Calender. The little lego figurines are so cute. Here is what it looks like after the J Bomb has finished playing with them.

And here are a few of my favourites.

And lastly, I’ve already voiced my concern about some of Santa’s antics this year. It seems even Lego Santa’s aren’t immune to scandal. Here is a nudie rudie Santa having a shower!

Using the Advent to Develop Character Plus Christmas Book Giveaway!