Christmas always feels like it starts on Christmas Eve. It’s the time when the anticipation reaches its climax. Of course the most anticipated event according to the J Bomb was the imminent arrival of Santa Claus. There was a great deal of discussion about the optimal positioning of the stocking, speculation of the contents and he was most eager to tidy up his room to ensure Santa’s safe passage, not wanting to be responsible for any injury while the jolly old man went about his business.

Cousins had been around that day to play.

﻿
They were busy all day which allowed me to make a pile of gingerbread slabs.

I used a recipe from Donna Hay‘s December ’09 issue. I hadn’t made a gingerbread house before and this recipe appealed to me because Donna described this as resembling a flat pack house, so it sounded easier than most.

One of the things that has frightened me with gingerbread houses is cutting out the various pieces accurately to ensure you can build the house. With this recipe you pressed the mixture into a cookie tray, so they were all the same size. Then you cut them. I was a bit frightened that I’d crumble the whole slab when cutting, so I had an extra slab. (Donna’s recipe was for a much bigger cookie sheet then mine, so that worked in well.) It was a bit time consuming because I had only one sheet in that size with sides, so I had to press the gingerbread in, cook it and then when it was cooled down enough, repeat the process over again. But since there were 5 kids in the house that day, it kind of worked in well spreading it out over the whole course of the day.
﻿So here’s the mixture when I’ve pressed it into the tin. Lots of finger prints.

Donna Hay reccomended the back of a spoon to press it flat. I found a floured glass worked well and was a bit quicker.

So here’s the uncooked gingerbread as flat as I could get it. (It would have taken me until Boxing Day if I tried to make it perfect. 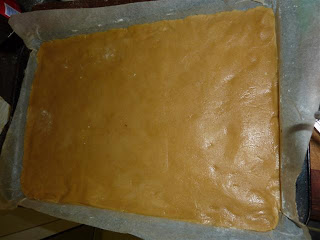 By the time the cousins headed home and The J Bomb and I were ready to construct the house, it was getting later in the afternoon. We made a good start and everything was going well until Daddy came home early and decided to mow the lawn with the ride on. Even though riding the mower is something that happens regularly, the gingerbread took a 2nd place so I had to wait until the grass was cut before continuing with the house. We did get it finished, but dinner that night was a casserole I had made the night before (in a fit or organisation) but there was nothing to accompany it. (I know, casseroles in an Australian December is ridiculous, but it has been quite cool in T-ba with all the rain.) Luckily the excitement of Christmas being the next day made everyone forgiving of our simple meal.

So, we got it finished and the boys were only half an hour late to bed. I had made the mistake in a past Christmas getting the kids late to bed on Christmas Eve and we all had a miserable day with tired cranky children, so I was determined to try to maintain the bedtime hour.

It was on display when the family came over on Christmas night, but we ended up letting the kids eat it on Boxing Day. This seemed to be a good move. I took it over to my Mum’s since we had a family get together there. Mum has complained that she is still finding squashed gingerbread in places. It seems our supervision skills needed improvement and some kids had wandered around eating. Being damp due to a high amount of rainfall made the biscuit quite soft. (In fact due to the mositure one of the eaves had collapsed before the kids could eat it.)

Oh, and remember I said I’d made an extra slab of gingerbread? After the boys were in bed, I whipped up a little manger. (This is what the kids ate on Christmas day.) 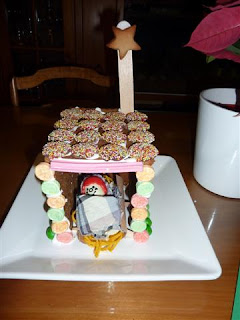 I left it on the table for a Christmas surprise.

Anyway, it was a lot of fun, and I have a feeling that we’ve just started a Christmas tradition.

Does anyone else make gingerbread houses for Christmas?

The Beauty of Christmas