Three Bubs in a Tub

Of course I’m always behind in sharing these pictures. Here are the 9 months photos, we’re still yet to do the 10 months pictures. We’re cutting it down to the wire with illness and our photographer going on a cruise. (Lucky girl.)

So here they are at 9 months. That darn chair is getting smaller. Say what? It’s my babies getting bigger? Nooooo!

And a little reminder of their nine month progress.

And here is the fabric shoot. Legs are getting too long to stay in the shot.

Without further ado, here is the next group of pictures Linda has taken in our monthly photo project. (Click here to see the monthly photos against a fabric backdrop.)

I think this group of photos really show how much they are growing. Here are each individual photos.

They were so tiny during the first month. We had to find something to prop them up because otherwise they were lying down and you could only see their feet.

It’s a bi hard to see the difference here in size, but they do have a little more flesh on their legs, and they definitely had grown! You can’t tell, but they were all crying in this picture which certainly reflected what life was like in month 2! 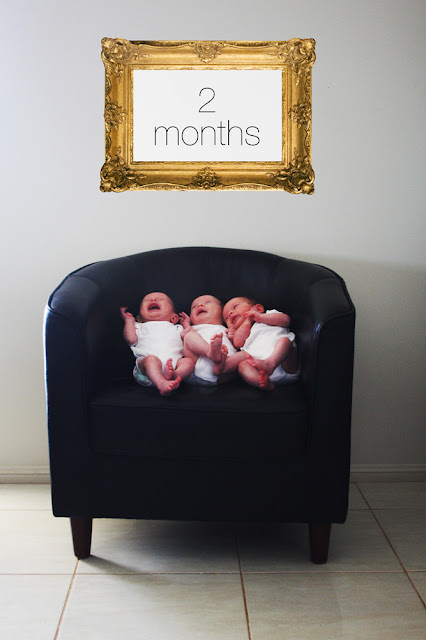 More crying in month 3. Such was life. It was Christmas time, and so reflected in Missy’s onesie. You can certainly see they are filling out more of the tub seat this time.

Hooray! Smiles have started! It certainly reflects that the sore tummies from cholic and reflux are starting to settle down.

Here’s the month where they were puking ever so much – therefore the colour appropriate bibs! Isn’t it cute how Missy and Chook are clasping hands?

I love Joey’s little hand resting on the couch here. Poor Chook’s sleeping away, and Missy was starting to feel squashed!

The triplets are now seven months old – I suppose I ought to schedule another shoot!

Can you remember that my friend Linda and I were doing a monthly photo project? I was inspired by John and Sherry’s photos of their beautiful daughter over at Young House Life. So when I was preggers with the bubs, I made the call out to my friends who knew more about photography than moi, and hey presto, Linda took up the challenge.

You may have thought we had given up since there has been nothing posted since Month 3, but no sirree, we have not. It’s just that Linda has been an ultra busy lady given that it’s been Easter, and she is one of the key ingredients in organising a huge event in our city called Easterfest.

Despite her busyness, Linda has been dropping in and clicking off some rounds of the trio and then going back to work, work, work. Now that Easter is over and she’s (kind of) recovered, she’s been able to edit the pictures in bulk.

So without further ado, let me show you exactly how much my adorables have grown.

To look closer at the last 3 months. Firstly there was Month Four. Since it was January, the babies are on a fabric featuring an Aboriginal print to celebrate Australia Day. We were pretty chuffed that they all simultaneously looked at the camera for the first time.

Month Five arrived and the babies were puking with renewed energy. Normally I take the bibs off at the last moment to photograph. (I’m so looking forward to when we can ditch the bibs forever.) It just wasn’t happening this month, so in the end, as a reminder of what the month was like, the babies are photographed in their appropriate coloured bib. To make up for being puke machines, the bubs all razzle dazzled us with beaming smiles. It was only appropriate that Linda was the first one to capture all three smiles on film at the one time.

And then there was last month. Month Six. Aren’t they growing ever so much? And look with their extra maturity, they look so very organised neatly in a row! The babies have a bit of an owl theme going on in their nursery, so the fabric in the last two months feature owls. For this month, they triplets are sporting very fetching owl body suits that their great aunts lovingly had screen printed for them and given to us at my baby shower. 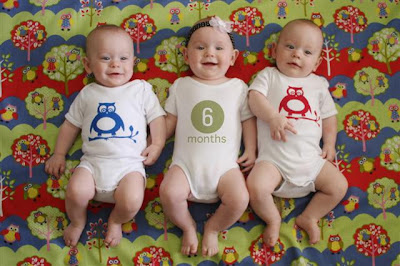 So, what do you think? Cute, eh?
Keep hanging around the next few days, because as a part of the project we also photographed them in my leather tub chair. I can’t wait to share these pictures with you also, so hopefully I’ll get a chance to upload them soon. (Update: Click here to see.)
Continue Reading

The title of today’s January Photo Challenge is “Someone you love”. I thought I’d post again the trio of ‘someones’ that I love, because I haven’t yet shown you the 2nd and 3rd month of the triplet’s monthly photo project. I didn’t take the photos. The wonderful Linda did. Go and check out her newest photos at 100 Days of Living and Giving  as she’s also participating in the January Photo Challenge. I’m loving her perspectives.

The triplets hit the three month mark in the holiday season. This photograph was actually on New Years Day, however I thought it was close enough to Christmas to justify the Christmas fabric! 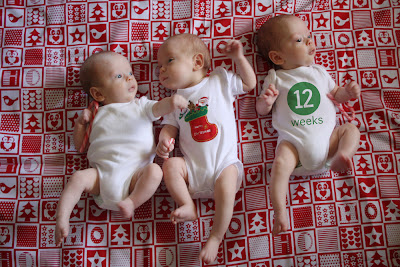 Do you know how incredibly hard it can be to get three babies photographed without crying? Not easy let me tell you. Chook is chucking a wobbly here in the tub chair. He cheered up after a bit, but someone else started crying… 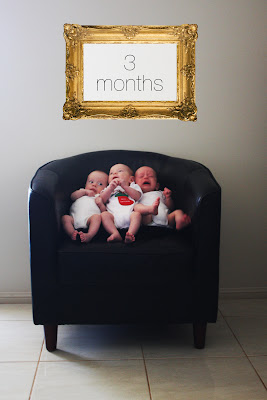 And here they are hitting 2 months. Somehow I got the order mixed up compared to the first month. Don’t know how. I had the picture there, studied it, double checked, and then put the babies down in the wrong spots. I’ve decided to keep them in this order, so I can remember that the boys are in chronoligical age either side of Missy. So that’s Joey on the left and Chook on the right.

And as for the tub chair. It wasn’t a happy moment. They are actually all crying here – really loudly. You can’t really tell except for Joey. But hey. It reflects what month two was like for us. Lots and lots and lots of crying from the reflux and colic. (Did I say lots?)

And here’s a flashback to the first month. I don’t know if this fully reflects just how tiny they were…

And they were remarkably well behaved the first time in the tub. ﻿

I’ll look forward to sharing more with you as the year progresses. Which pic is your fav thus far?