The Invasion Has Begun

This week I opened the cupboard to retrieve a chopping board when I saw this. 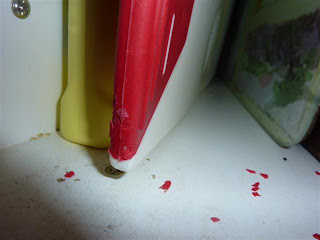 I knew with a sinking feeling in the pit of my stomach that the invasion had begun. The damn rodents had started eating my chopping board. I was officially at war with mice.

I had read this post (and other similar content) on Crazy Sister’s website not so long ago with a sinking pit in my stomach. I live in the same area, and have started noticing that mice have been hanging out in my garage, so I have been hoping that they wouldn’t cross the threshold to our home.

Of course they did.

Now, when you open the pantry the unmistakable smell of mouse slaps you in the face. It also seems that the playroom has become mouse headquarters. It absolutely reeks in there. It has been good motivation to clean things up, but even still there’s far too many hidey holes for mice. Particularly in the cupboard. Eeew.

This morning The Baby and I were up early. (at The Baby’s insistence, it certainly wasn’t my idea of a good time on a Sunday morning.) The Baby was in the kitchen rearranging the kitchen drawers when a saw a flash of fur run out past him and under the piano. I screamed, The Baby started crying, out of shock, he was clueless to the imminent danger we were both in. I ran and collected The Baby (putting myself in danger, for my great love of the child) and took refuge on the sofa. No reaction from The Accountant who is rather zealous about sleeping in. After a little bit of yelling where I demanded he came and saved me, he surfaced with a shoe. Whereby after some poking the prodding the mouse kept running under various pieces of furniture and was in general state of confusion, running in circles at times while I screamed.

I have to say the hideous creature was rather fat and a lot slower then other mice – obviously our floors are a virtual smorgasbord thanks to the youngest members of the household. Even so, The Accountant still wasn’t able to whoop his furry fat ass.

By this time J Boy had also surfaced and was also rather condescending about my fear of mice. “Boys like me aren’t scared of mice all days long. Mummy’s scream when they see mice. Boys don’t, because it’s just a mouse.”

It’s currently holed up under a cabinet. 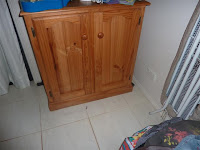 There are two mousetraps guarding each exit. I can’t believe we only have two traps. I intend the rectify the situation as soon as possible.﻿ 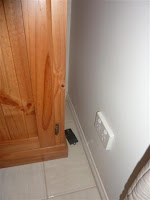 Because if it were up to me, that whole little space would be lined with traps. Then I’d like to see the little bugger escape. Horrid animal.﻿

* Sorry for the stronger than usual language. Rodents bring out the worst in me.