Teaching Our Children to Remember

Our family has just returned home from attending a local ANZAC Day service.

For my readers outside Australia, ANZAC Day is an Australian and New Zealand public holiday. It is a day of remembrance for those who have fought and died for our country, and especially remembering those who fought at Gallipoli in 1915. At dawn on the 25th of April, 1915, boats carrying young Australian and New Zealand soldiers approached the rocky shores and cliffs of Gallipoli. There was an intense battle while the men clambered from boats as the Turkish soldiers fired from the clifftops. Many men died before their feet even hit the water. Those who did make it to shore had to negotiate their way up the rugged terrain under heavy artillery and fighting. The casualities were high, but it is thought that the campaign at Gallipoli signified when our young nation reached adulthood.

So today is a solemn holiday as we remember not only Gallipoli, but all the brave men and women who have fought for our country and its freedom.

This morning Alex went to the dawn service with Trent. Unfortunately Jonty had gone to watch Daddy play futsal (indoor soccer) last night and was absolutely zonked. It was impossible for Alex to wake him. There will be other years though, as there are always services at dawn at war memorials throughout the country because it was at dawn when the Gallipoli campaign began.

Later in the morning there was another 10am service so as a family we all walked and rode bikes up for this commemoration. Our children are still young, but Alex and I still consider it worthwhile to participate in these services when possible. In time, they will grow in understanding of the history and knowledge of the consequences of war. For now, we encourage them to be respectful of soldiers and to know that there were many brave men and women who died so we could have a free country. We explain things in very simplistic terms. We whisper why the flag is at half mast, why the soldiers standing at attention, instruct boys to remove their hats during the national anthem. Although it is difficult, we encourage them to stay as still as possible throughout the service. It is important for them to learn there are times which require us to show respectful behaviour.

Because we were up the back, I found it alarming the amount of parents who let their children run around, rolling down the grassy banks and making a great deal of noise. I know it’s very hard to keep very young children still for long periods of time, and sometimes it just doesn’t happen, despite your best efforts. In those instances, I think parents should be applauded for at least making the effort to come. But letting children, especially those over the age of three run around with no mindfulness of the ceremony that is taking place, I feel is showing great disrespect. Mothers yelling at the kids in the middle of ceremonies or worse still, lighting a ciggy in the middle of the national anthem and having a smoke are not teaching or demonstrating to their children how to honour the dead and the sacrifice that has been made.

At one point, there was a group of children take leave of their parents and start to commando crawl up the grass banks. (At least their play was an indication of them being aware of the occassion!) It didn’t take long before the father realised his kids were on a mission and he re-directed them, as quietly as possible back to stand with the family. I think this show good parenting, recognising that kids will be kids, but quietly and firmly insisting on appropriate behaviour. I just wish a few more parents surrounding us had the same control over their children.

I think for the most part Australian are teaching our young to be mindful and remember those who have gone before us. Record numbers turn out to celebrate ANZAC Day every year, young and old. For the most part children stand with their parents, little fists clasping flags or little ones with tired eyes and heads nestled into a parents shoulder. For most Australian families, we will keep their legacy alive, we will not forget.

They shall grow not old, as we that are left grow old:
Age shall not weary them, nor the years condemn.
At the going down of the sun and in the morning,
We will remember them.
How does your family remember on ANZAC Day?

Today is ANZAC day. If you are not an Aussie or Kiwi, you may not be familiar with the day. It is the day that our countries honour the Australia New Zealand Army Corp. You can read more about the day here.

I just read a nice little story here about a mother sending her son to war. I decided to join the ANZAC Day blog challenge and remember my family’s involvement in serving our country and the implications war had on our family.

Our family has a limited history of military service. My grandfather served in World War 2, but was never posted overseas due to being an excellent training instructor.

My great grandfather and great uncle served in World War 1 in Europe. Their tale is a good story, that has often been retold by the family. This is how the story goes according to oral tradition:

When my Great Grandfather, Ben, married my great Grandmother, Peggy, in 1918, he already had 5 children to a previous marriage. The eldest of those 5 children was Les. Ben and Peggy had three more girls, the youngest of these was Beryl, my grandmother.

Ben was a sharp shooter. He was a finalist in the prestigious  “Kings Shoot” competition. (A competition among various countries in the Commonwealth, which still continues today) Here he is photographed at the event. He’s the man kneeling on the ground with an enormous moustache. 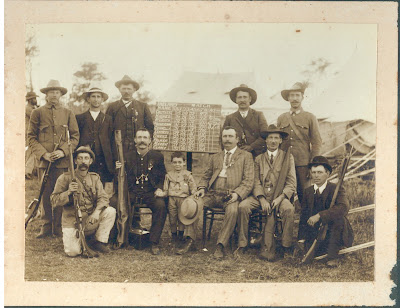 When WWI began, Ben signed up and was sent overseas. Ben had a natural gift of leadership and this assisted him rising up the ranks. Unfortunately Ben also had a natural larrikin spirit. The combination of these two traits meant that Ben had a series of promotions followed by demotions.

The favourite family story illustrating this is when Ben the Sharp Shooter became Ben the Shark Shooter.

On a troop carrier to England he was travelling in enemy waters and there was a rigid regime of silence that was being enforced. The men used to congregate on the top deck watching the waves. A shark was noticed swimming alongside the boat. Ben, then a sergeant and well known as a crack shot, started boasting that he would be able to shoot the shark. Before long a rifle was smuggled up to the deck. Ben took careful aim and BANG! He shot the shark. It resulted in him being stripped of his stripes and sent to the brig for the rest of the journey.

Meanwhile back at home, young 16 year old Les had lied about his age and signed up into the army. The story is that Ben was extremely surprised one day to meet up with Les in France. Ben informed an officer that Les was underage and Les was sent back to England until his 17th birthday.

Ben was gassed on the fields of France. He was returned to England and spent a great deal of time in convalescence before returning home to Australia. His family said he never was the same after war. His spirit had been crushed and he was often sick as a result of complications sustained from the war. He died in 1948.

Les served overseas before being sent home after being caught in a bomb explosion on Flanders Fields where he was catapaulted through the air. He remained deaf in one ear for the rest of his life and became sterile.

Les had been engaged, but called it off when he returned home. He never married, but instead he devoted his life to the care of Ben’s wife, his stepmother.

They remained living in a small cottage which had been built for return soldiers. It was the house that my Gran grew up in and I remember visiting “Old Gran and Uncle Les” there as a young child.

When Uncle Les was no longer able to care for Great Gran by himself, she was transferred to a nursing home and faithfully Uncle Les would walk over an hour every day to visit her.

There are many forms of sacrifice that Australian soldiers have demonstrated for their country. Their sacrifice and involvement has not only influenced the family life of thousands of Australians, it has shaped our country.

It is an honour to remember these courageous men and women every ANZAC day.