We are currently having a short family holiday at the beach. It’s raining right now. It has been raining since we arrived, and I don’t expect it to stop until after we leave. We knew it was going to be raining, but figured a getaway would be still worthwhile since The Accountant unexpectantly has got a few days off before starting a new job. (A good thing!)

The rain I can deal with. It’s the boys that tend to be more of a challenge. All three of them.

The Accountant has been dying to re-live his childhood memories and take Buster four wheel driving. We’ve never had a 4WD before, so it’s been something he’s been waiting to do for a long time. So, we went for a long leisurely drive along the beach today. 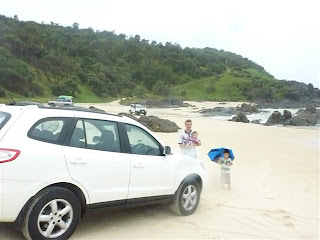 The boys did remarkably well for being in the car for so long, but what else could we do after all, it was raining, so we may as well go for a drive along the beach. The Accountant was happy. We bought an ice-cream from “Mr. Yum Yum” the beach 4WD vendor and then the boys were happy. We even got out and had a wet walk to Freshwater Lake which made us all happier. 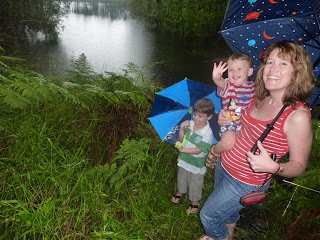 We also had a look at Double Island Point.

It briefly stopped raining while we had lunch, which made The Accountant feel like swimming, only it was raining by the time he drove to the beach. So after he went for a swim in the pouring rain while the boys and I waited in the car, we continued on our way to the hotel, where he forgot that he had promised J Boy a swim in the pool – of course he didn’t feel like swimming at the point, so put it off. When they finally returned, I had a nice hot spa ready for them to jump into. While The Accountant got The Baby ready for joining them in the spa, he looked up to see J Boy weeing into the spa. Dealing with this incident so distracted The Accountant that he let go of The Baby, quite forgetting that he had just taken a dirty nappy off said child. By the time he remembered this critical information The Baby was happily sitting on my pillow, deciding it was much more comfortable then several spots on the bed. (Of course leaving spots on the bed.)

It’s lovely getting out of town, really, it is.

With two young boys, I don’t think it’s quite correct to describe it as a holiday however.

The Boys Trip to Cairns