On Monday it was J Boy’s 5th Birthday. Don’t you just love a child’s excitement on these days? It started with an excited little boy running in and jumping on our bed. Of course he wanted his presents immediately and being the loving parents we are, we gave up any further plans to continue sleeping and headed out. J Boy had already scurried out in front of us and had been side tracked by the race track that he had received the day before. Daddy and little brother were happy enough to have a play with him.

Present time! He loved the Lego set we gave him and the binoculars Toddler T gave him were also a favourite.

Unfortunately Mummy forgot that it needed batteries. It’s a regular mistake I make with children’s toys, sadly. We went shopping during the morning and bought hot dogs for lunch and stocked up on the batteries then. Toddler T was supposed to go to bed after lunch. It didn’t go to plan, since I tried to put him down in his new big boy bunk bed. After putting him back to bed, over and over and over again, I gave up and put him back into his cot. However by now it all had become a revitalising game, so I admitted defeat and allowed him to come and play again.

This disappointed J Boy greatly who wanted to play unhindered with his new toys. Luckily for J Boy, Grandma came and deported Toddler T to her house. This also gave me the opportunity to have a rest while J Boy kept himself occupied with his new lego. When I got up we got to work making the birthday cake. The only time I had made a cake on the day of his birthday was last time I was pregnant. I swore I’d never do it again. It took me hours to make a train cake and I was so stressed trying to get it done in time for the party. At least this time I was experienced and had planned a very simple cake.

Due to me attempting to make J Boy a superhero cape the night before, and due to overwhelming tiredness I’d fallen short on time. Normally I stay up until at least 2am doing birthday preps, but this year it was 10:00p.m., lights out for me. And even then, I had no cape to present. I’d messed up the measurements and it turned out to be a slimline cape that was unbranded by any superhero signia due to me forgetting to buy the fusible webbing to iron the emblems on. So the cape is to be made another day.

Luckily for me, I had convinced J Boy to have a farm birthday cake rather than a spiderman cake. I knew that it needed to be simple since I’ve got depleted energy supplies at the moment.

The farm cake was a simple rectangle with green icing covered in green dyed coconut and chocolate icing for the dirt in the paddock. To make it a little more interesting than a plain rectangular cake, I built a hill in the grassy meadow – made out of gingerbread I had frozen in the freezer from Christmas. Then all we had to do was add the plastic animals, toy John Deere tractor and “The Bush” – a collection of yellow lollipops. (I can’t believe they were yellow – the wrapping was green!) Even though it was a super simple cake, J Boy loved it and was positive it was like Grandad’s farm. Sometimes I wonder why we push ourselves so hard, kids really aren’t hard too please.

Also to keep it simple, I had avoided the big party with all his friends, (for the first time). We planned to go to the local Mc Donalds, with the grandparents, aunts and cousins, and a one family we are very close to. We thought we’d give the kids a play on the playground, feed them a Happy Meal and get a relatively early night, especially since some of the kids had school the next day.

Would you believe, we arrived at Macca’s to discover the playground was closed? Of all the days, they had decided to bleach the playground and shut it down for a few days! J Boy was in tears and devastated. We decided to walk across the road and get pizza at the local tavern – which happily also has a playground. The kids were happy. It wasn’t an early night by the end, due to meals taking a bit longer than at Macca’s. Everyone was gracious though and J Boy had a brilliant night, and of course he was very happy to receive more presents! 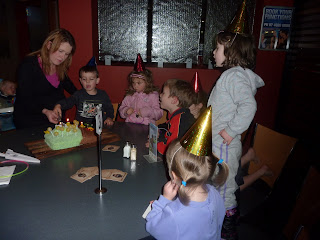