Hi! *She says a little shamfaced, knowing just how truly appalling she has been at blogging of late*

I’ve been thinking I just need to get on and do a little update. At the moment I’m feeling so very motivated, as I’m feeling great – I’ve just had six hours uninterrupted sleep!!! Hooray! The triplets were very difficult to get to sleep last night, a fitting conclusion to the day which was also full on. However, they were all bathed, fed and asleep by 7:00pm and what do you know – they slept through until 5:00am! And again I say Hooray!

The triplets are now 4 months old. They are completely delightful, flashing big smiles liberally and starting to be quite the chatterboxes, gooing and gurgling away, kicking their little legs furiously to express the wild excitement to be living such a grand life.

Their colic and reflux is settling down, although it is far from over. We are now at the stage where they are constantly throwing up. We go through myriads of bibs during the day and several changes of clothes. However, they do not seem to be crying as much, a nice indication that it is not painful. They are still feeding around the three hour mark as a general rule. Sometimes more, (and on days like the last few), sometimes less. For the last two days they seem to be drinking continuously. However, since they have slept through the night, they are fully forgiven!

OK. So, proof that life is crazy busy at the moment. I started writing this post over a week ago. I’ve got 20 minutes in the house by myself now, (J Boy at school, T-Star is hanging out with Grandma and no helper for a little bit) so thought I’d try to finish it. Already, I can hear some movements indicating that one of the three sleeping triplets is waking. OK, heard a dummy drop on the floor. Life with triplets… Time is up.
(Turns out, Missy is stirring, but seems quite content, so I’ll motor on…)
I should firstly add that the communal sleeping through the night, most certainly didn’t take off. That night was a one off. And as it turns out, even the validity of all three sleeping through that night is contested. The Accountant maintains that Chook woke up at 3:45. I’m sure it was 5:00.  Suppose it doesn’t matter now, just hanging out for them to do it ‘again’. The Accountant recently bought an expensive bottle of red. He has pronounced that it will be consumed after all three babies sleep through five consecutive nights. He originally made it 7 consecutive nights, but in the desire to consume the bottle sooner, he adjusted the goal. Phew. I think the bottle may be a tad dusty before we pop the cork. Or rather, unscrew the cap…
J Boy is continuing to enjoy school. He is super tired by the end of the week, and consequently his behaviour at home can get quite feral. I’m sure this will get better as his stamina improves and he gets more used to school. 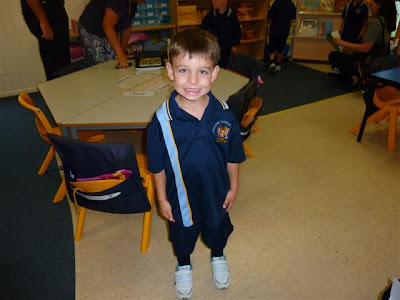 T-Star is getting used to being ‘the man of the house’ once Daddy and Jonty leave for school. He is still a very doting big brother, and can be very helpful. The other day I had three screaming babies and only two adults. I ended up sitting next to T-Star as he nursed a baby and fed him a bottle. Turns out it was activity enjoyed by baby and toddler alike! He’s a very sweet and loving child. Until he starts chucking major two year old tantrums. Eeeek. Never fun, and I tell you, T-Star can chuck a doozy!

﻿ A Further update:
It is now the third week since I started this particular post. Last week I had a moment in time, but blogger was playing up and I wasn’t able to post, so I had some script saved in Word. It’s truly reflective of life at the moment. Busy, busy, busy. The triplets are now 5 months old, and despite my original joyous declaration, their sleep seems to be getting worse rather than better. For the last several nights I have been interrupted hourly most of the time. Hence I’m rather exhausted at the moment. I had my first episode of pure exhausted desperation yesterday morning when I just couldn’t settle Joey down in the early hours of the morning. I ended up howling. The Accountant came to the rescue and shipped Joey off to another room. But he had to swap Joey for Chook, so it was still another hour before I got to sleep, but at least Chook was content to feed, whereas Joey was just wriggling and crying, inconsolable.

We had our first weekend without Alex this weekend past. My youngest sister was so kind to come around and help out the entire weekend. I also shipped the two older boys over to my mother and other sister, so it all went smoothly, apart from the interrupted sleep. (Not helped by the fact that my sister and I got to bed late doing sisterly pursuits such as chick flicks and online window shopping.)

I think I’ll sign off for now, before the interruptions continue and I never get this posted. Has your life been full of interruptions also? Who or what normally interrupts your schedule?

The Boys Trip to Cairns