I thought I’d just update you on some of the day to day happenings in our household at the moment.

And they are having water in sippy cups after they eat. (Still using bottles for milk.)

We have a very cute dragon living with us. 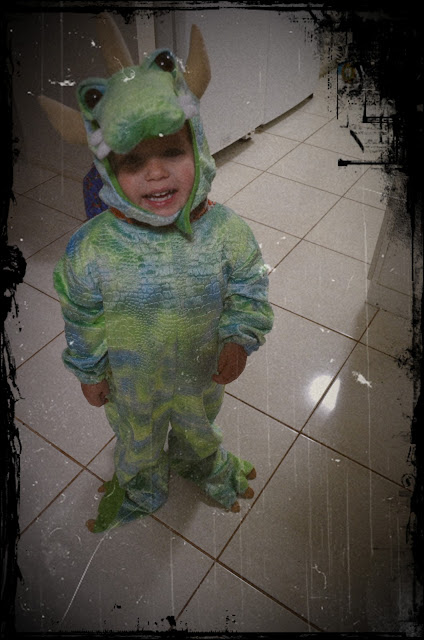 J Boy has loved playing soccer this season. Even though he is pretty well clueless about the rules of the game and spends a great deal of his time falling to the ground and rolling around the field. (We’re working on getting him to stay on his feet for an entire game. It’s harder than you may think.) It seems like he’s just starting to get the hang of it though. Which is a shame, because it’s the last game of the season on Saturday.

The triplets have now become a tourist destination. We had a Japanese exchange student, Genki, who is staying with a family in town come to visit us for a morning. He was a great young guy who fitted in with the family happenings for the day. He played with the babies and built a train track for T-Star, who adored him for it and re-named him as “Donkey”. The babies had to be quarantined into the porta-cot to keep the track safe from imminent destruction. I let Genki feed the triplets, and he did a great job. It can get a bit crazy. When Miss Rachael asked if he wanted her to take over he jumped up so quickly that I thought there had been an ejector seat installed in our chair. I think he did enjoy the experience though! We took a photo with the trio and Genki, but they decided to get grumpy (something about it being lunchtime) so they had to be bribed and are photographed with arrowroot biscuits!

Alex had a lovely Father’s Day. So proud of my amazing husband who is now father of 5.

We really tried to spoil Daddy, with everything from a power tool (chosen for Dad by J Boy), basket ball (chosen by T-Star) to homemade works of art.

For lunch we had takeaway fish and chips in the park with my brother-in-law and his family. We make a jolly little party with the four adults and ten kids! We’re quite the rent-a-crowd these days! The kids loved playing with their Daddies. The triplets couldn’t believe the freedom of being in the great outdoors. Poor little things, don’t get out much. Hopefully they will a bit more now it’s Spring. The big kids especially hung out on a plastic thingy that you were chucked balls through. I don’t think that it is supposed to be used as a climbing frame, but the kids thought it was brilliant. Until J Boy got stuck in one of the tubes. Luckily Daddy came to the rescue. That’s why Dad’s are heroes. 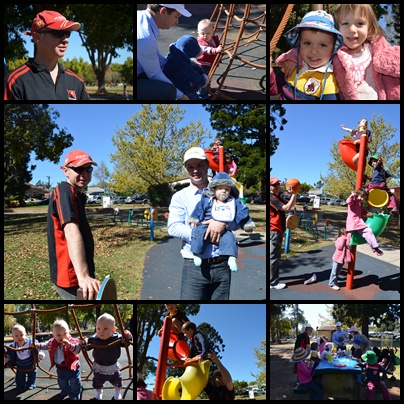 Once we got home Daddy had a chance to play with his new toy. I think he liked that.

I’d love it if you took the time to comment about what’s happening in your family of late! What did your family do for Father’s Day? (And guess what? I’ve now enabled a reply button in the comments section, so I can comment on your comments. Hurrah!)