Last week Jonty arrived home beside himself with excitement. His first wobbly tooth had fallen out. This event has been much anticipated. In fact about a year ago he declared that he “Wasn’t sure, but I think my tooth might be wobbly.” It certainly wasn’t wobbly, but the amount he played with it, hoping for a wiggle, I though it might become wiggly. He has had friends who have lost teeth for quite some time, but it has taken until the ripe old age of seven before any of his departed his own gums.

Yesterday he came bounding out of the car after school jumping all over the place, excited that his tooth had fallen out! It had been wiggly for a week or so and he had been playing with it endlessly until it finally dropped out and he went and told the teacher who wrapped the precious little toothy in a bundle of tissue and sticky tape.

Of course there was talk of the tooth fairy. Jonty knows that we are the mythical gift/money bearing creatures such as the Tooth Fairy, Santa Claus, Easter Bunny. I just have heard of children being so disappointed when they discovered that it was their parents, so I decided not to conceal it. Nevertheless, thanks to the imagination of childhood, he still gets swept away in the fantasy of the moment. I also find that when they are young, they still think they are real despite being told, but when they are around five, they begin to understand, but don’t mind, so long they still get all the benefits!

I went and found one of those little momento boxes for a first tooth. Trent was given two when he was a baby – so I just allocated one to Jonty. I don’t know what I’ll do when the triplets start losing teeth! 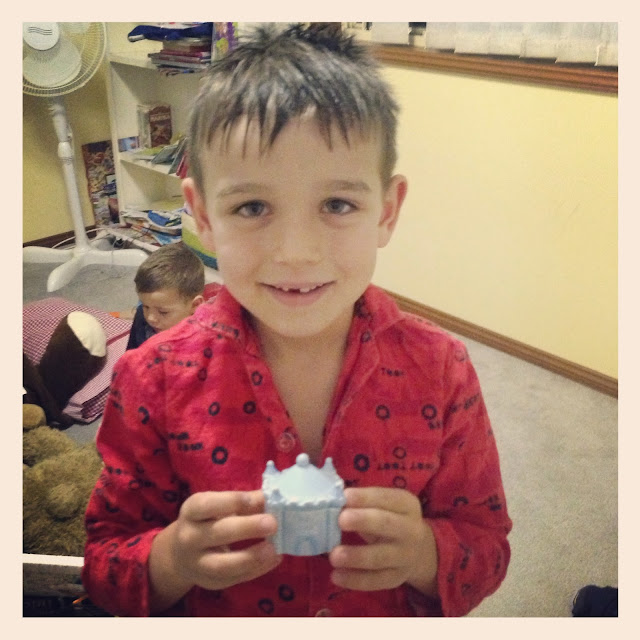 He then wanted to know what happens to the teeth. I made the mistake of mentioning that I knew some mothers kept every baby tooth of their child’s. Thanks to the hoarding gene that he has inherited, this immediately appealed to him. I then had to negotiate the terms of payment from the tooth fairy. Once he understood that (this) toothfairy buys the teeth – if you want the money, the tooth will have to disappear, he agreed that the moula was better than a boxful of teeth. He still didn’t completely like the thought of departing with the tooth entirely, so he had a photography session taking pictures on his DS of the tooth before he put the lid on the box and went to bed. The ways of the modern child… Oh, and because he is really up with the times, he also blogged about it! Jonty has just sent up a blog to mimic Mummy’s. Check it out at: Jonty’s Happy Heart. (If you could leave a comment for him, I will have one very excited boy!)

The next morning he came into our bedroom with a worried look on his face, as he walked in, I saw him clutching the little blue box and a feeling of deep remorse immediately hit me. I had forgotten about the tooth the previous night! Before he could say anything, I instantly said, “Oh Jonty, the Tooth Fairy forgot!” Instantly you could see the relief flood into his little face. I have never been more relieved that he already knew that I was the tooth fairy. I don’t think he would have handled the tooth rejection nearly as well.

As it was, he was an incredibly good sport about the whole affair. I told him to run back and put the box on the dresser again and I’m sure the Tooth Fairy wouldn’t be far away. He immediately scampered to his bedroom. I made a big to do of trotting down the hall flapping my hands pretending to fly in. Jonty, bless his heart, saw me coming, and darted into another room so ‘he couldn’t see me’, but after I put the money in and grabbed the tooth out, I “accidentally” flew into the room where he was and flew around in circles at the “distress” of being found. (You know, anything for a laugh.)

He then returned to our room holding the five dollar note – looking disappointed! I asked him if he were OK, and he said, “Yes, but I thought I might get $100.” Gulp. The reason I forgot was I was going to give him $5 – a note for his first tooth. After that I’m planning on gold coins. But I hesitated because I wondered if $5 was too much, meant to ask The Accountant, never did and promptly forgot. Of course, I didn’t hesitate to put $5 in the next morning, if it was too much, call it late fees. $100 though? I explained that the tooth fairy is nowhere near that rich, and he’s doing pretty well since the 20c/50c I used to get as a kid!

He recovered pretty quickly and became very proud of his money although he is even more proud of his gappy smile. That gap is going to become bigger very soon as the other front tooth is very wobbly! I was shopping in my local Big W the other day and saw a discounted Scholastic book by Don Gardner.

How could I resist this cute little story about a monkey wanting his two front teeth? Even better the book has a CD, so we are treated to two songs about missing teeth and a monkey’s redition of “All I Want For Christmas”. Don’t you just love it when you find a children’s book that perfectly suits what’s going on in their lives?

Has your child ever experienced Tooth Fairy Fail? What’s the going rate of teeth at your house? Do you tell your children about who the real Tooth Fairy, Santa, Easter Bunny is?

Should Children Do Homework?