Being able motor around independently has resulted in many triplet’s developing favourite places to hang out. I’m not a play pen type of mother. I’m not even fussed on gates to keep them out of areas, although sometimes it would be useful. Of course it’s important that there are child locks on the areas that have dangerous items. But I like the whole concept of them roaming wild, and if I don’t want them somewhere I shut the door or put a new child lock on a cupboard.  I thought you might be interested in knowing the triplet hotspots.

We have the triplets toys positioned in baskets out in the general area at the moment along with a bouncer thing. Thankfully they like to play with their toys. (Better than T-Star who hardly played with any toy until he was about 18 months old.) So you will often see them here hanging out in a serious toy session. 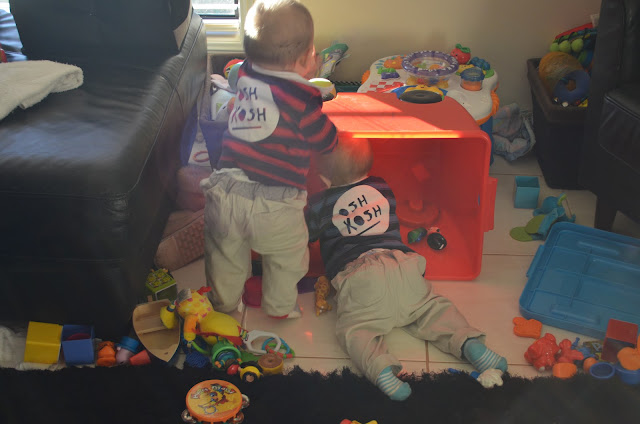 The Playroom.
The babies have all their toys in baskets in the family living area. But they adore getting into the playroom and playing with big boys toys.

We are constantly having to do inspections and sweeps to find small toys and an assortment of items that otherwise will end up in a triplet’s mouth. Even still, we have fished a huge amount of bits and bobs out of various mouths. One time Missy was not eating her food and making weird faces after each bite and a funny little cough. I thought she didn’t like the food I was giving her. So I tried something else. Same reaction. Then she did a big vomit so I thought, she must not be eating because she’s feeling a bit sick. Miss Rachael carried her off to her bath, where she discovered Missy had consumed a tiny piece of plastic from some wrapping J Boy had opened earlier and it had stuck to the roof of her mouth. Poor little girl. And just a tad scary for us too. It’s so hard keeping every tiny bit off the floor. Especially with two older brothers who seem to drop things constantly.

A big favourite. There are some points of key interest that all three triplets in this room.

The Pantry
The triplets ADORE the pantry. If the door is left even a little ajar and they notice, they will all make an instant bee line to it. I keep things at their level, so they love knocking around the plastic containers of drinks, lunchboxes, cereal containers. I also keep the children’s cutlery at a level that the big boys can access it in plastic cups. This is a favourite object to knock over. If we let them, they would hang out here practically forever.

But since then I have allocated them their own cupboard. The Tupperware cupboard. They pull everything out with gay abandon. I no longer have “a place” for anything in that cupboard. It is strictly a chuck everything randomly back in the cupboard and quickly shut the door. Sure it’s hard to find things. But sometimes, it’s all about giving the little guys another activity. And Tupperware throwing. Apparently it’s a great activity.

The babies love their own baths and once it’s over (or while they are waiting to get in) they are always keen to supervise the others. If they crawl in to watch the big boys, they sometimes end up drenched fro

I really can’t work out why this is a hot spot for the trio. There really doesn’t seem like much for them to do in here. (As opposed to the plenty of things to do for those of us who can actually wash, fold and iron.)

But when the babies are in the mood for a bit of clean fun, they will happily congregate in here for a comfortable half hour and have been known to remain for up to an hour. All I’ve observed them doing is looking out the glass door, (even though this isn’t the only one in the house), squeezing in between the space in between the glass door and washing machine, talking to one another, chewing pegs, crawling in circles and banging on the washing machine. (I’m told it makes a great noise.)

So. Do you have hotspots in your home? Where are they, and who is your hotspot occupant(s)?

International Blog Swap Day: What to Expect from Newborn Twins