Sometimes it’s nice to record the events of a lovely day. Yesterday, despite it being completely amiable, in the greater scheme of things will probably be entirely forgettable. However, we took a few happy snaps because it’s days like this that should continue to give pleasure years after the sun sets on another domestic dream.

It started with a phone call to Grandma. It’s the holidays, and often she will have one grandchild at a time for a “Grandma Day”. The grandchildren love it and it creates a special bond with them and Grandma, that is entirely non-forgettable. J Boy rang Grandma, but it was for unexpected reasons. His request was for Grandma to have a Grandma Day with T-Star. J Boy’s ulterior motive was that he wanted to build with “Big Kids Lego” and didn’t want interruptions from his younger brother.

Grandma complied and once T-Star left (Happy as a pig in mud, he’s always a big fan of getting out of the house … I don’t take it personally.) the Lego building began. Today’s construction was a jet. We had also hoped to make an airport, control tower and cargo transporter. Plans that are far too lofty for a six-year-old with developing fine motor skills and who finds concentrating on one task challenging. (Although he had great enthusiasm in a side project building a bizarre creative drag car.)

One high point in the building project was the moment when J Boy was able to follow instructions all by himself while Mummy looked after a baby for a few moments. (Something he has been reluctant to do up until now). A low point was after the copious praise he was given, Mummy pointed out a very small error that needed to be fixed. This made my perfectionist son deny the existance of a mistake and then go into meltdown over its existance and almost pulled apart the entire project in protest of its existance.

Eventually the project was complete thanks to persistance and a little help from Mummy and Miss Rachael. Does he look happy much?

Somewhere during the proceedings, I got an exciting phone call from my doctor’s office. They had contacted the rep for Wyeth and had organised a donation of S26 for the triplets. The office called to tell me TEN boxes had arrived. This ended up being a total of 30 tins of formula. Such a huge blessing. Especially when S26 is a formula I trust. The drain on our finances is rather enormous at the moment. (I hope to share about a rather major purchase next week. It is still being finalised at the moment) Every little bit helps. We have also been blessed by  Huggies who sent us a box of boy’s nappies and Johnson & Johnson who gave us a big box of a large variety of their excellent products. It’s always a relief to omit something from the shopping trolley on any given week. And when I need to add it to the trolley again, it’s a pleasure to support these companies after their goodwill to us.

*Sidenote, I’ve not received any instructions or compensation to write about  these companies on my blog, but I thought they were worth a grateful mention.*

While I was out collecting the formula, the babies woke up. The boys were having fun with J Boy’s old toy, which has just become their new toy.

And then Grandma came home with T-Star and presents! As it turned out, T-Star and Grandma had spent a portion of the day doing birthday/Christmas shopping at the toy sales. And of course Grandmas always have spoiling rights, so you can’t take a grandchild into a store and not buy him a little something! And what you do for one child, you must do for every child. So everyone had their lucky day!

The triplets with books. Mmmm. Tasty. 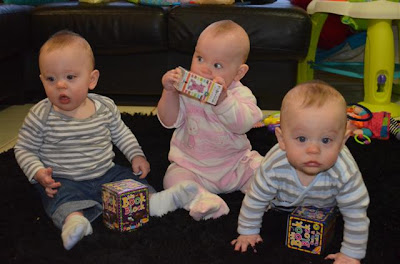 J Boy is a little spy crazy at the moment. Except when he saw on the news that a spy was caught and put in jail. For a week after that he decided to be a farmer. After looking at the spy paraphanalia in the toy stores, he is reached a decision that the danger is worth the gadgets. So, Grandma’s secret message carrier went down a treat.

T-Star wouldn’t pose with his beloved Spiderman motorbike. But he kept it safe with him at all times. Even watching Mr. Moon before bedtime.

Once Miss Rachael went home, I was by myself with the five kids during busy hours as The Accountant had some CPA training. J Boy was a great help. He entertained Missy. It’s amazing seeing the two older boys with Missy. Somehow they are just that little bit more tender with her. Mind you. T-Star’s ‘tender’ is not 24/7, she may not have as much brutal treatment as he reserves for the baby boys, but she is still mistreated regularly by our boistrous two year old.

While I was breastfeeding the second baby, J Boy even fed the third baby for me. Chook looks pretty content with his big bro.

So another day, just doing life as a stay at home Mum.  Do tell if you are a parent. Well, actually you don’t need to be a parent, how silly of me. Non-parents often have very helpful advice! Do you have a/know a/am a perfectionist? How do you encourage them to make mistak

es without ending up in a puddle? And how on earth do you get your 6 year old boy to stop having melt downs and tantrums at all? I am so over it. When on earth do boys think it’s not cool to cry. Because really, I’m ready for my lad to deny his inner emotions. I really don’t need to know he thinks the life is not worthwhile because his brother got the iced roll with more pink icing on it. Really.

But to get back to the happiness of the day. What are some moments that you enjoy that you’ll probably forget the particular details of, but altogether make up the pleasantness of your life?