October 5, 2011 2 Comments
Week 32
Another major milestone has been reached! Up until today, if labour was to begin and unable to be halted, I would have had to be transported to Brisbane via ambulance with a midwife, or if the babies were born here in Toowoomba, they would have been flown to Brisbane in a helicopter. 32 weeks marks the point where the facilities here in Toowoomba will be able to cater for premature babies.
Also, the survival rate for the babies is now excellent. There is now a 98% chance they will make it and there is a significant decreased risk of long term complications resulting from premature birth.
I don’t know whether it was the relief that I had reached this milestone, (that’s Mum’s theory anyway), but I also felt a surge of energy this week. So I started the week by having a coffee shop date with my friend and her beautiful kids. One of my amazing friends  allocated Thursday mornings to doing something with her boys and Toddler T. Because it’s school holidays this week, J Boy and her Princess were included. We went to an outdoor coffee shop. The children had a wonderful time riding the little bikes on the verandah, running around the grassed areas with the free range chickens and playing on the rockers and sandpit.
I had a lovely time eating cake and watching my selfless friend hop up and down like a yo-yo sorting out all the childish dilemmas. Such a long suffering lady!

I was nice and tired after that, so I went home and had a quick sleep while the kids went and played elsewhere. The kids returned and we hung out for the rest of the day doing quiet activities, the quietest of which was Trent sleeping. Jonty played with his toys, we watched a DVD together. It had been awhile since the boys had just been at home with me for awhile. By 4:00 they started to get bored. I let them outside and lay down on the couch because even though the afternoon was low key, I was starting to get tired. I kept checking the boys. They did not want to come inside, I was too tired to make them, so they played out in the yard until 6:00 and I got Alex to chase their little, dirty, cold bodies inside.
Friday was another home care day. It started with the co-ordinator coming to visit to make sure everything was OK with Mrs. S. This all went smoothly. The day already was easier than the week before. It’s inevitable that the days where the children are at home are going to be more tiring for me. I did get a good rest in the afternoon though when Mrs. S. took the children to the park and library.
Throughout the day I my head and body really began to ache. By the weekend it was apparent that I’d picked up another bug. So over the weekend I struggled with a virus. With regular doses of paracetamol and lots of rest I was feeling much better by Monday morning.
I had been really disappointed on Saturday night that I had to miss out on one of our good friends 30th birthday party. I was really hoping to pop in for an hour or two. But being sick and exhausted it would have been foolish. As I sat at home by myself I was feeling over being so socially isolated. I’ve had people coming and going from the house, but I just felt like getting out.
So on Monday morning, after Mum had taken the kids to her house, I decided to pop down to the pool (only a few minutes from our house) and say hello to some of my friends that I knew were down there taking their kids for a swim. I stayed there a bit longer than I intended, but loved catching up and having a good chat. I went home and had a sleep – only to wake up discovering that while I’d been sitting in the sun, I had paid no attention to my fair skin. I woke up with burning knees. I looked down and discovered I had two small patches above my knees red raw! I felt so foolish! With lots of applications of aloe vera it took at least three days for the burning to settle down!
That evening I went around to Mum and Dad’s for dinner, my aunt and uncle were in town, visiting from Melbourne. The big occasion for their visit was my grandfather’s 93rd birthday the next day. For his birthday we had a family lunch then went out for dinner that night. 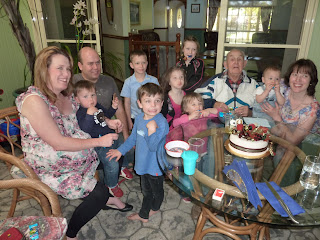 Unfortunately, I then found out the wisdom of my previous anti-social behaviour. That night I ended up having to go home before the meal was served, I was sore and exhausted. I was incredibly stiff and sore for the next two days, just from sitting up longer than usual.
I felt a bit silly for overdoing it. I was also worried that I’d go into labour and it would be all my fault. I had a dream that I went to hospital and started going into labour and got a big lecture about my foolhardy behaviour when the doctor and nurses saw my crispy red knees!
Thankfully I was able to rest up after my ‘exploits’. The final doctor’s appointment of the week went well. The babies hearts still beating strongly. The only concern was that my blood pressure was borderline high at 140/90. Dr. Gibson thought I should make another week, but said we are going to have to monitor it.
So, more rest for me, and more books. Bedrest for me has consisted of sleep and copious amounts of reading. I’m tending to average 1 ½ – 2 books a week, which has been the best pregnancy kickback I get! I suppose the next chance I’ll get to do this much reading will be in my retirement!
Previous Post Next Post

The Triplets are Here!